The Benefits of Kinesthetic Learning (learning by doing)

The Benefits of Kinesthetic Learning (learning by doing)

While the dominant teaching model is that learning is ”sit and git”, strong evidence also points out that lecture alone does not ”cut it”. We actually have a strong connection between physical education and improved cognition. Educators generally tend to divide movement, emotion and thinking into separate compartments, however, the relationship of movement and learning is so strong that it pervades all of life – and emotions are intertwined into the mix as well.
Versatile movement supports neuromotor development and the learning of motor skills and, through it, cognitive activity. This is because motor and cognitive skills develop in parallel and the same central nervous system mechanisms are responsible for their control.

We also know that all mammals (including humans) play and, especially, in their maturing years. Even though there are several theories why, there is no controversy around the notion that it is generally good for us – learning skills, learning social interaction, regulating emotions and tension and learning appropriate reactions to the environment and those around us.

Physical activity has been found to promote informational activities, especially Executive Functioning, which plays an essential role in decision-making, problem-solving, and learning new things. Executive Function refers to the coordination and control of data processing. Executive Functioning regulates other cognitive functions relevant to human activity, such as memory, attentiveness, and thinking. Frontal lobe and Executive Functioning consists of several activities; the key functions are inhibition (control of attention and reactions), working memory (memory of currently used information) and cognitive flexibility (adaptation to changing situations/ability to move quickly from one activity to another). These functions form the basis for higher-level thinking, such as reasoning, problem solving, and planning.
(for more on this see prepsec.org: Conference Proceedings, Vol 1,no. 1 ”Problem Solving and Developing Executive Function in the Young Brain,Parker, Calame, Choi)

The same areas of brain that activate and process movement are the same parts that process learning:
The cortex feeds stimulus to the cerebellum (”movement cortex”) which then feeds it back to the brain, creating a close connection to Excecutive Functions. The pathway from the cerebellum feeds back to parts of brain that are most involved in memory, attention and spatial perception: practical learning.
This has been proved by MRI -scanning. When our brain ”learns to move”, at the same time it strenghtens our ability to predict (think about) our moves before we execute them so that we can improve how we control them. That’s how motor skills’ learning and using (in outdoor activities, games, sports and so on) are always connected to other crucial parts of the brain that are responsible for mental procesessing: predicting, sequencing, ordering, timing and practicing and rehearsing a task before carrying it out. So these activities stimulate both motor and cognitive development of the human brain.
Experiments with rats have proved that those animals that exercised in enriched environments had a greater number of connections among neurons than those that didn´t. In addition, animal studies indicate that voluntary exercise influences gene expression to improve learning and memory. This improved pattern of gene expression enhances many factors that support the encoding and transfer of data, synaptic structure plus the activity and plasticity of neurons – ALL these processes facilitate learning!

There are also studies on school applications that link increased neurogenes to increased cognition, better memory and reduced likelihood of depression. SO: moving, playing and exercise may grow a better brain!
Multiple studies suggest that moving/exersice supports success at school – it improves classroom behavior and academic performance.

Edgar Dale’s (1969) Cone of Experience explained that the broad base of the cone illustrated the importance of direct experience for effective communication and learning. Especially for young children, real and concrete experiences are necessary to provide the foundation of their permanent learning. 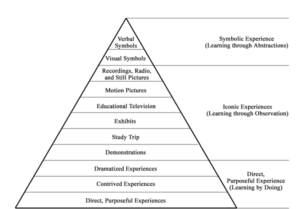 Many programs have also found that methods that include movement help learners with specific needs
(ex. Dyslexia).
– Movement is a quick way to change stuck congnitions and emotions
– Play and movement activate the brain across variety of areas by stimulating neural networks to help learning and providing alternative routes to learning
– It helps raise energy or calm down in order to direct attention/focus

80% of the world’s children and adolescense move too little!
Let’s keep students active, then we will keep their activity level up and provide their brain stimulus that activates the whole brain. Also, when we can take a break and go outside, the brain will get the oxygen-rich blood needed for highest performance. => BRAIN COMPATIBLE LEARNING
A 12 year Oxford University study with Europeans showed, by brain imaging, that exercise and cognitive functioning are interconnected to a greater extent than we previously thought. Physically active 12 year old children had a larger volume of brain and cerebral blood flow and functioned faster than young people with little movement. Their brains were more active and the brain areas were more strongly interconnected.

The revolutionary development of the brain is especially high during adolescence. In teen years, the brain matures dramatically and shapes according to how they use it. Excercise and outdoor movement can have different effects on the brains of people of different ages. Studies have suggested that the link between excercise and cognitive skills is stronger in younger age groups than in adults and the elderly.

So we, as educators, need to make sure that we are providing all the appropriate stimulus to this flexible adolescence brain so it may grow all the new brain connections. We need to help our youth learn new skills by activating and connecting the motor, emotional and conceptual thinking area of brain (frontal lobe) purposefully to create more neural connections -> more high functioning and a flexible capacity.